You know there’s one thing my husband and I can’t help but enjoy: a good steak.  Don’t go all PETA crazy on me, but we do like eating meat.  We actually don’t have steak very often but when we do we like to have a good one.

In the past we have tried many things to cut back on how much money we spend buying meat:

However, my access to winetags has been more difficult as I engage in less trading.  It was time to try something different.  In the past many people have raved about the quality of the meat at Costco.  My husband and I decided to give this a try.  Initially we looked at buying already cut NY strips steaks for $6.99 a pound.  That was until we walked a few feet over and we found a slab of NY steaks on sale for $4.69/lb.  So check out what we did: 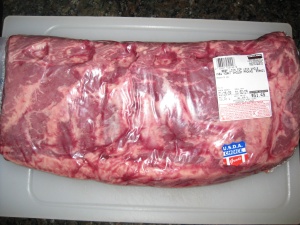 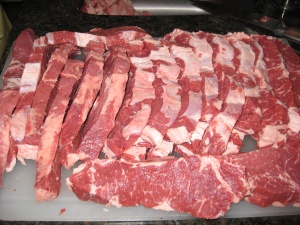 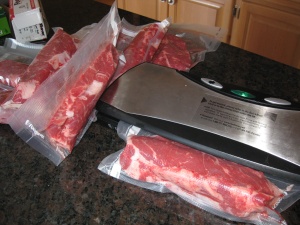 We bought around 11 lbs for $51.45.  We did lose maybe a pound of it after we trimmed the fat.  But we would have done the same with the steaks since they also needed trimming.  We vacuum sealed different portions of about 1 lb each.  This should last us for possibly a year.  Like I said we don’t eat it that often.  To put it in perspective, before buying this meat I told my husband I would love to hit Fogo de Chao.  That place is amazing and expensive! We spend around $120 for both of us when we have been there and that’s only because we don’t drink any wine or other alcoholic drinks.  While buying this meat was not cheap, it will probably keep us away from this or any other steakhouse for a while.  So what we spent on ten steak meals is paid back with the cost of a meal for one at a steakhouse.